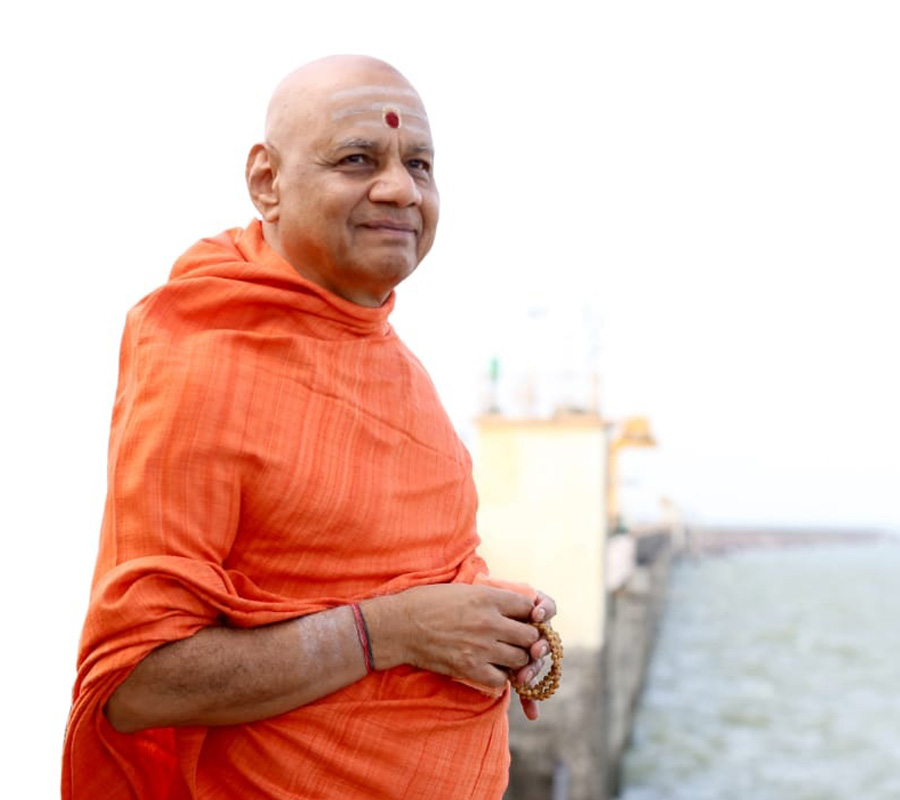 Swamiji is well-known not only in India but also in distant foreign countries; thanks to His spellbinding discourses on Srimad Bhagwat, Ramayan, Mahabharat, and other ancient, holy books of spiritual sciences. However, this is not all that can describe completely His multi-dimensional and inspiring personality. Hence, an effort is made to briefly introduce Him.

Swami Govind Dev Giriji Maharaj, formerly known as Acharya Kishoreji Madangopal Vyas, (fondly called by his devotees as “Swamiji”) was born on 25th January 1949 into a piousBrahmin family in Belapur, a small village in Ahmednagar district of Maharashtra.

Swamiji inherited the legacy of study of ancient spiritual sciences, devotion and committed religiosity from His parents through a long family tradition.

Thereafter, Swamiji went to Varanasi, the spiritual capital of India, for further studies into Vedas, Upanishads and other scriptures of ancient India, under the enlightened guidance of the renowned Vedic scholar, Vedamoorti Dr. Vishwanathji Dev and accomplished the coveted degree of ‘Darshanacharya’.

Alongside His studies, Swamiji gave various discourses, furthering His 120-years old family tradition. His first religious discourse was on Srimad Bhagavat, in His own native village, Belapur. Swamiji was barely 17 years of age, then.

An ardent devotee of Saint Dnyaneshwar Maharaj, Swamiji has made Shri Dnyaneshwari (a Marathi equivalent of Srimad Bhagavad Gita),the guiding principles of His life. Swamijihas even founded the Sant Shri Dnyaneshwar Gurukul, to impart to the next generations of India, the priceless wisdom enshrined in Shri Dnyaneshwari.

Blessed by His Holiness Shri Jayendra Saraswati, the chief of Kanchi Kamkoti Peeth in Tamil Nadu, Swamiji was initiated into ‘Paramhansa Sanyas’ (Renouncement of the highest spiritual order), byHis Holiness Swami Satyamitranand Giriji at the holy city of Haridwar, on the banks of river Ganga, on the auspicious day of the 30th of April,2006. Following His sanyas, Swamiji, formerly known as Acharya Kishoreji Vyas,is now formally calledShri Govind Dev Giriji Maharaj, fondly as Swamiji to his followers.